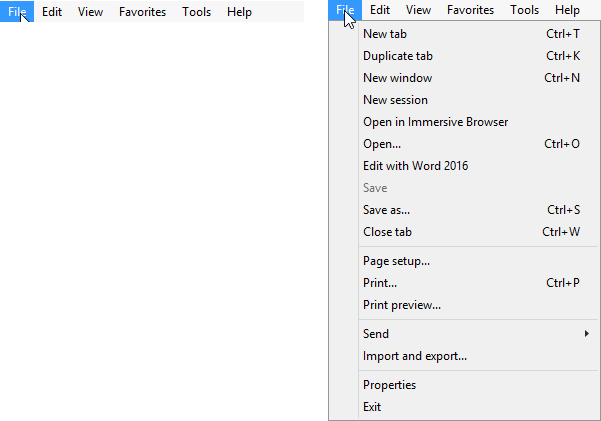 Originally developed at PARC back in the 1970s, menus are lists of options in a graphical user interface (GUI). They can be either visible (sometimes called “menu bars”) or expandable. In expandable menus, the list of options is exposed when a menu handle is clicked or tapped; the menu handle can be a label, an icon, or both. In this article we focus on expandable menus.

Internet Explorer menu bar (left) and File menu (right). The File menu is an expandable menu hidden under the handle “File.” The menu option Send is further expandable to display a submenu.

Best Practices for Homepage Links on websites
01.04.2019
Our research indicates logos positioned in nonstandard locations damage usability.  Users are 6 times more likely to successfully navigate to the homepage in one click when the logo is left-aligned than when it is centered. Simply moving the logo towards the right side of the page caused people to
Working Memory and External Memory
31.03.2019
Sometimes users create their own external-memory tool. For example, we may use a spreadsheet, a file, or a web note to keep track of interesting summer camps for our children, of places to see in a vacation, or of articles to read.  When engaging in online shopping, many users will save candidates
Login Walls Stop Users in Their Tracks
01.04.2019
When we discuss login walls in our mobile-usability classes, we frequently get the comment “But it’s only for the first time; the next time we keep them logged in!” Guess what: there may be no next time. Users are utterly vexed to have to enter information before they get a taste of what is
Leave a Reply Cancel reply